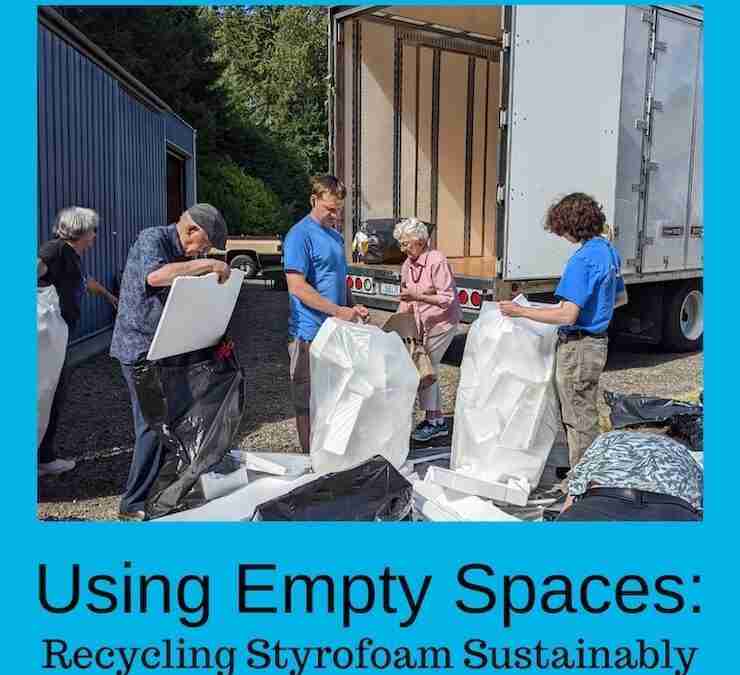 Photo:  Volunteers and drivers load Kitsap County styrofoam bound for recycling in Kent, WA, into a truck that will return to Kitsap full of food for Fishline Food Bank.

Styrofoam is a difficult plastic to recycle because it’s hard to  transport and handle.  But last week three local organizations in Washington State pooled their resources to keep nearly 1000 cubic feet of styrofoam out of landfill, collecting clean styrofoam and transporting it by using the empty space inside a truck on a deadhead run to Kent, WA. USA

Fishline Food Bank, Poulsbo Rotary Club, and Hill Moving Services worked together to collect, sort and transport the Expanded Polystyrene, often made under the brand name Styrofoam, to Styro Recycle in Kent, WA.

Styro Recycle uses a “densifier” machine to heat and compress the material into heavy blocks of polystyrene which they sell to become crown molding, picture frames and building materials.

The project took shape in response to a problem: Poulsbo Rotary had no more space to store the cleaned and sorted styro they had been collecting.

“We didn’t want to rent a box truck and drive it round trip to Kent. It is just not a sustainable use of time, fuel or carbon emissions,” said Poulsbo Rotarian Lori Cloutier, chair of the service club’s Trash Talk Taskforce.”

“We really wanted to find a truck that was already going to Kent” she said.

That’s when Lori Maxim, Executive Director of Fishline Food Bank realized that their monthly delivery of food from the Kent area included a deadhead run from Poulsbo to Kent.

Hill Moving Service has been working with Fishline to help with the food bank coalition pick up from Kent for years. “We are very grateful to Mike Hill for his continued support of Fishline and want to thank his team for often going above and beyond what is asked of them.”

Hill Moving Service is a family owned and operated business that has been located in Poulsbo for more than 40 years. Owner Mike Hill was happy to add the styro transportation to the food run.

Styrofoam is mechanically easy to recycle – once it is collected and transported to a densifier machine.  But the very properties that make it good for packaging make it nearly impossible to transport in a sustainable way.  It does not compress well, causing a few ounces to take up enormous amounts of space.

It also breaks easily, causing small beads to escape into the environment where it is often mistaken for food by birds and animals.  In large co-mingled recycling trucks, styro took up space and also broke up and contaminated other recyclables. It is not allowed in Kitsap County transfer stations or curbside programs, and by some estimates may take up to 25% of landfill space.

While curbside recycling for styro is out of the question, recyclers like Styro Recycle will accept clean, tape and label-free styrofoam for free – but they must drop it off.  Many people dislike styrofoam, yet find that it can be very hard to avoid and difficult to get rid of, making the collaboration of Rotary, Fishline, and Hill Moving an effective way to keep at least some styro out of the landfill, and back into the economy.